You could give your people Culligan Water.
Interested in learning more about PFAs? Sterling can help!

Sterling Culligan Water has been a part of the central Wisconsin community for nearly 70 years. We're proud to serve the counties of Waupaca, Waushara, Portage and Outagamie, which include the communities of Waupaca, Weyauwega, Fremont, New London, Clintonville, Manawa, Marion, Iola, Amherst, Stevens Point, Plover, Plainfield, Wautoma, and Wild Rose, to name a few.

Waupaca Chamber of Commerce 2021 Small Business of the Year! 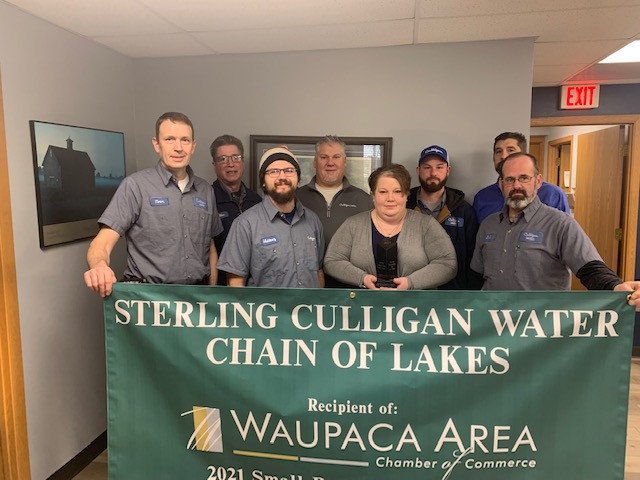 The Small Business of the Year award is to recognize a business which demonstrates an economic enhancement to the area; provides service to the community; and enhances the community image, enriches community life and employs 20 or less.

Need after hours or emergency service? Call our 24/7 service line at 715-258-2242.
Hardness, high-iron and acidity are the biggest water problems in the central Wisconsin area, but in the last two years we have seen a rise in nitrates and arsenic as well. 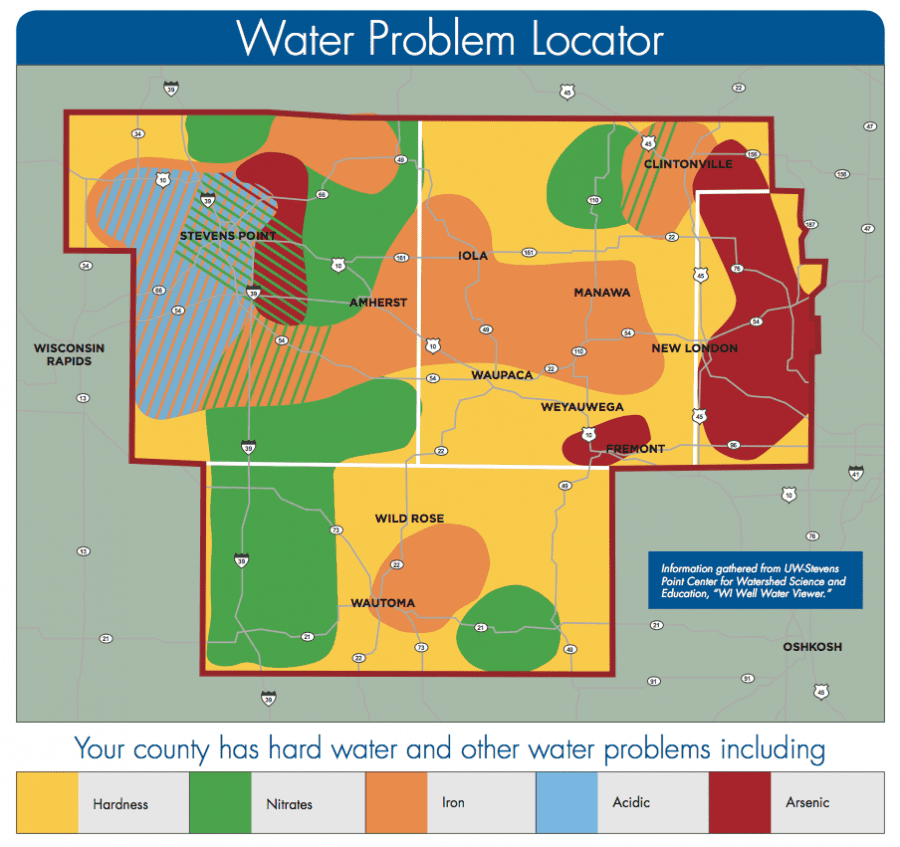 About Sterling Culligan Water of Waupaca

Sterling Culligan Water began in October of 1949, when W. Sterling & Jo Tangley and Frank Decker formed a partnership and named their new venture Culligan Soft Water of Pierce County. They established a new Culligan franchise and built a plant in Ellsworth, WI. The business grew steadily for the next 25 years. During those early years, Sterling and Jo’s son, Peter, grew up and actively worked in the business. After 35 years as a Culligan dealer, Peter and his wife Karol passed ownership to their son, Bret, who grew up and actively works in the business. He's held a variety of roles since 1982, serving as president since 2005.
Sterling Culligan Water is an award-winning Culligan and Pure Water Technology (PHSI) franchise dealer, known for exemplary customer service, expert water professionals and affordable water treatment solutions. We are a third-generation, family-owned company, with values based on integrity, safety, teamwork, and continuous improvement. Our goal is to continue to create, keep and grow customers. Three of our stores are located in the northern half of Wisconsin, serving Wausau, Eau Claire, Waupaca, Stevens Point and their surrounding communities. We also have two stores located in central Minnesota, serving Sauk Centre, Willmar, Little Falls and their surrounding communities. Our dealerships are locally run by employees who are a part of the communities that they serve. Sterling Water's mission is to exceed our customer's expectations by providing goods and services of the highest standard.
The Waupaca dealership was established in the 1950s by Irv Koslowski. Patrick Canney and Dick Martin purchased the dealership in 1986. In 1996, the dealership moved from its downtown location to a new building, constructed at our current location. We became part of the Sterling Culligan Water family in December of 2014.

Reviews for Sterling Culligan Water of Chain of Lakes
Overall rating: 4.8/5
Leann Matson
03/25/2022
Switching to Culligan Water of Waupaca was the best decision ever! We had a competitor servicing the home when we bought the house. We tried very hard to get along with the other company but found them condescending and the tech reps inept. Culligan has been so upfront and knowledgeable from the salesman, office staff, tech reps and even the boss. When you can pick up the phone and get great customer service it goes a long way. Plus we are saving money with Culligan. That is a win all the way around. If you are tired of your current water company blowing you off - switch to Culligan. You won’t regret it.
Brenda Plum
03/05/2022
Culligan is the best! I am the Post Prom Advisor for the Waupaca High School. We so appreciated the donation of bottled water for our annual event! Our event provides an experience of food, fun and games to keep our students safe after prom. Thanks so much Jay and crew for your contribution to the Waupaca community!
David Breunig
12/15/2021
A good experience! I was not a super easy customer to deal with as I am very particular in the way things are done in my home, but from sales to scheduling to install, all of these folks are great! And they even called me to follow up after the install to make sure everything is working and to review the install experience. Would recommend highly!
knutie47
03/02/2022
Love my Culligan man…so nice and very friendly
Tammy Phillip
01/25/2022
Culligan Water has been nothing but top notch to serving my small business! I would recommend them to any small, large or corp business any day!
Read More Reviews...
Hey Culligan!
715-201-8784
Send A Message
Address
956 Furman Dr, Waupaca, WI 54981, USA
Rated 4.8/5
Read Customer Reviews...
Hours
Monday: 7:30 AM – 4:30 PM
Tuesday: 7:30 AM – 4:30 PM
Wednesday: 7:30 AM – 4:30 PM
Thursday: 7:30 AM – 4:30 PM
Friday: 7:30 AM – 2:00 PM
Saturday: Closed
Sunday: Closed
Areas We Serve
Almond, Amherst, Amherst Junction, Appleton, Bancroft, Bear Creek, Berlin, Big Falls, Clintonville, Coloma, Custer, Dale, Fremont, Greenville, Hancock, Hortonville, Iola, Junction City, King, Larsen, Manawa, Marion, Nelsonville, New London, Ogdensburg, Pine River, Plainfield, Plover, Poy Sippi, Readfield, Redgranite, Rosholt, Saxeville, Scandinavia, Shiocton, Stevens Point, Waupaca, Wautoma, Weyauwega, Wild Rose
Review on Facebook
Learn more about how you can have better water.
Contact Us Now

Sustainable Water Filtration Solutions for You and the Environment

Clean water is essential for life. Find out what's in your water with a free water test from your local
Read More

What Are Your Water Resolutions?

Get a jump start on your new year's water resolutions! Schedule your free water test from your local Culligan Water
Read More
What Clients Say
Their team is great! any issues we've had (mostly due to us moving locations) they were prompt in correcting!